A few things we've grown  fond of since 1871.
We're proud of our many fun and unique traditions at the University of Arkansas. Here are just a few of the traditions that have shaped the U of A's distinct identity and have united generations of students.

How we became the Razorbacks

There are dozens of Lions, Tigers and Bears, but in all of college athletics there is only one Razorback – but it wasn't always that way. The university's teams were known as the Cardinals until Arkansas football coach Hugo Bezdek fatefully called his players "a wild band of Razorback hogs" after a big win over LSU in 1909.

The Razorback, characterized by a ridge back and its tenacious, wild fighting ability, immediately became a popular nickname, and one year after coach Bezdek's statement, the student body voted to change the official mascot to Razorbacks. 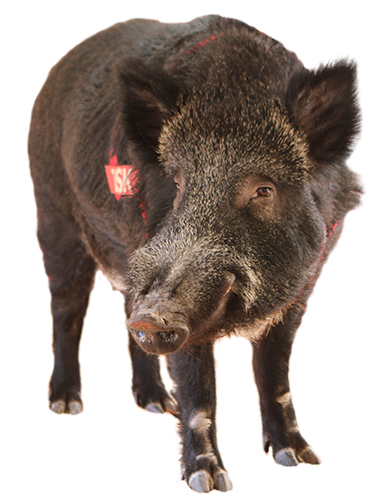 The live mascot that represents the Razorbacks today is no barnyard pig. Tusk V is a Russian boar, which closely resembles the wild hogs known as razorbacks native to the Arkansas wilderness. These razorbacks are tough and at times ill-tempered — animals whose fearlessness and doggedness were the inspiration for the Razorback nickname.

The tradition of having a live Razorback mascot attending football games and other events has been a fan favorite since the university's first hooved beast made its debut in the 1960s.

The Hog Call is one of the most recognizable chants in all of sports. Here are the basics:

The carillon in Old Main's bell tower plays the Alma Mater every day at 5 p.m. and at noon on the first day of classes each fall.

Pure as the dawn on the brow of thy beauty
Watches thy Soul from the mountains of God.
Over the fates of thy children departed
Far from the land where their footsteps have trod.
Beacon of hope in the ways dreary lighted
Pride of our hearts that are loyal and true.
From those who adore unto one who adores us
Mother of Mothers, we sing unto you.

On the first day of classes, when you hear the noon chimes, join in the tradition: 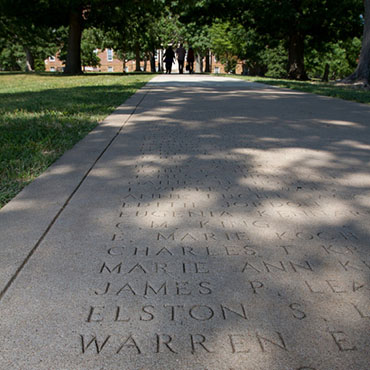 The U of A boasts one of the most unique traditions found on any campus: Senior Walk, consisting of miles of campus sidewalks engraved with the names of more than 200,000 University of Arkansas graduates, dating back to the first graduating class in 1876. It's the university's longest tradition, at least in terms of mileage. Senior Walk is concrete proof of the university's commitment to students. 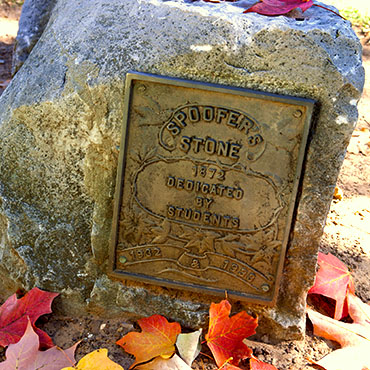 During the early history of the university, male and female students  were not allowed to mingle. In those days, students sometimes left love notes tucked into crevices of a limestone rock near Old Main. As time wore on, Spoofer's Stone became a popular site for marriage proposals. 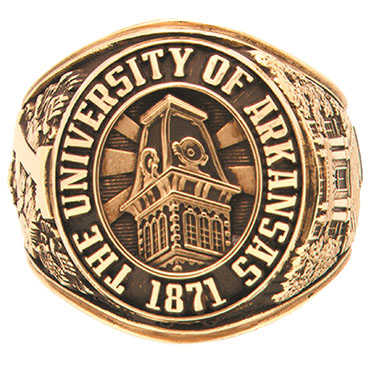 Because class rings haven't always been available at the U of A, this is our "newest tradition" on campus.